Welcome back to another blog. I've got some exciting new projects to share with you today.

As you may be aware, I've been designing for Technique Tuesday, using their floral Greenhouse Society Stamps. This month I've been very privileged to receive, along with the January floral stamps, the Animal House release: a set of animals and cute sayings that are also produced each month.

January's animal is the Playful Penguin and these are some very cute critters! 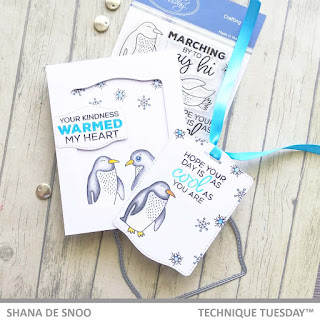 It's summer in Australia so it's nice to colour some cooler cards! I had 'snow' much fun with these creations and I hope you can enjoy them as much as I did!

The Playful Penguin set contains three penguins, two snowflakes and an assortment of sentiments to work with. I first decided to colour the penguins with my Nuvo markers (focusing in the greys) and see what ideas may pop up. 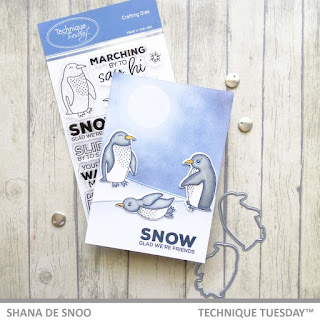 After spotting the sliding penguin, I knew I wanted to play with slopes. Have you ever seen a penguin sliding through the snow? It looks awkward but they go pretty fast, and any animated penguin movie I can think of always has a scene with penguins sliding down a hill!

I first blended the background for my card using Distress inks and The Stamp Market blending brushes. I had a small die-cut for my 'moon' space to add some more effects to the scene, and used both Hickory Smoke and some light Black Soot in my blending. 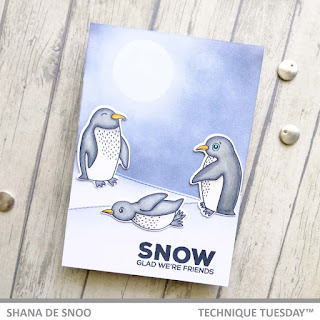 I cut some slopes using Heffy Doodle's Slopey Joe's border dies to create the snowy hills and lightly blended some ink onto the tops of these as well. I then die-cut my penguins, layered everything onto a card base including using Glue Dots from Columbus Trading, and stamped the sentiment in Memento ink.
I don't often do 'scene building' cards (and there are lots out there!) so this is a very small step into that direction. Let me know what you think. In the meantime, here's a close-up of the penguins. 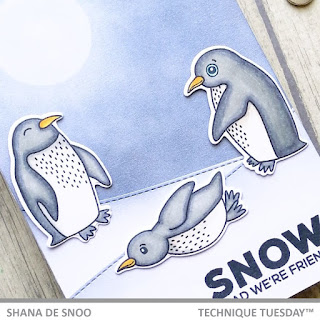 Next, I wanted to use a different medium to colour the penguins in, and so I reached for my Faber-Castell Polychromos pencils. I've recently written a blog on my thoughts on these pencils, so check that out here!

I wanted to create a card using the largest die-cut from the Stitched Essentials dies (another great Technique Tuesday product), but more importantly, I wanted to use that dies to create a border for the images on the actual card. 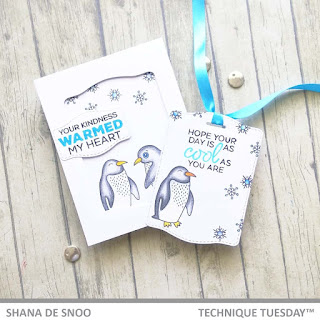 I prepared my card base to be just shorter than an A6 size card, and cut the same size again out of cardstock. I used the die to cut out the center of the card and put it aside for possible use later on. Then, I stamped the two penguins using Memento Ink and also included numerous snowflakes at the top of the scene.
Next, I coloured these images using the Polychromos pencils, working on the light colours that would reflect off a penguin's shiny black coat.
I then used another great sentiment from the penguin pack, and placed it on a label die from the Jam Jar die set. Instead of having the sentiment all in one colour, I decided to use some ink pens from Stampin' Up in order to highlight the 'warmed' part of the sentiment. 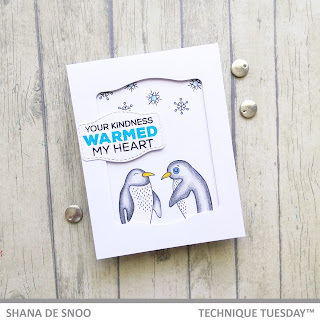 I used my Tim Holtz Stamping Platform so I could do this multiple times (it's rare to get a solid colour stamp like this in one go!) and used both black and light blue colours from the Stampin' Up marker range. I chose to use these markers rather than a stamping block because they come in pen style, making application a lot easier than trying to mask certain sections of the sentiment at one time.
Once this was all stamped and finished, I layered everything onto the card using foam tape.
I really like how the border frames the image, and how I've managed to leave the sentiment floating above the scene.

Remember the inside of the card that I had put aside for future use? While creating the card above, I realised I could easily create a fun tag with that section! Why not create another project using these stamps, and use the paper at the same time? 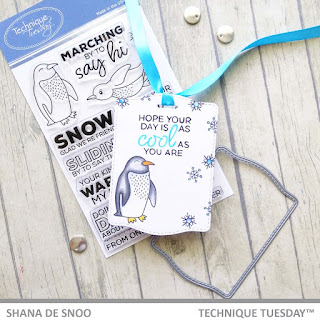 I took the tag and stamped one of the penguins and some more snowflakes again, leaving room for the sentiment I would choose later. I coloured these images in with my Faber-Castell Polychromos pencils again, which is always therapeutic! 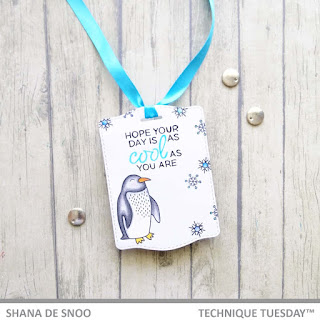 The Essential Dies set comes with some tag-creating dies, like small oval notches where ribbon would feed through. I used my die machine to cut the notch out, and then I selected the sentiment to sit below it. I wanted another highlighted section in the sentiment but it would be a little more difficult this time because of the layout of the words. This time, I stamped the sentiment with Inkon3's Fadeout Ink and then wrote over it with black and blue markers. Lastly, I picked some complimentary blue ribbon and tied everything up.
This tag would be perfect to add onto a wrapped present or gift!


That's it for today! This was a longer blog but I hope you like the projects I've made. If you'd like to see what else I do with other animal products, let me know and I may look into purchasing some other sets!


Until next time,
Shana xx