Hello everyone! Thanks for stopping by.

I am very, very excited to talk about this card. It's been waiting patiently to be posted for a while and I have so much to say about it! Considering it took me two solid hours for the colouring and over 9 shades of pink, I really want to explain how this card came together. 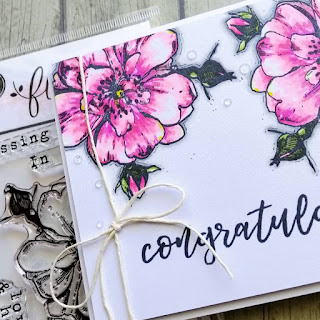 As I was organizing my cards into themes a while back, I noticed I didn't have many wedding or anniversary cards - which is a problem! I was looking for some ideas to create and then I stumbled across the Rose Stem from Hero Arts.

I had this stamp in my collection for a while but wasn't quite sure how to use it, what colours I should focus on etc. As of yet I wasn't too impressed with the pinks that Nuvo had produced (they were dusty pinks and not what I preferred to use) I had just purchased the Vintage colours set from Spectrum Noir and these happened to contain some pinks that I didn't have shades of in my Nuvo markers, so I decided to have a play. 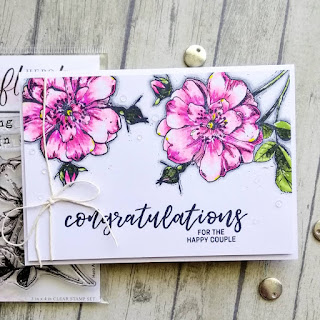 First, I used my Tim Holtz Stamp Platform to stamp the flower a few times, and also place those sentiments. The Congratulations is from Altenew's Bundle of Joy, and the tagline sentiment is from Simon Says Stamp's Floral Bliss (also a wedding themed stamp set).

As I mentioned, there are quite a number of markers involved with this card!
Firstly, I've used three shades of green for the leaves of this card, generally following the shading also provided in the stamp (Nuvo 410, 412 and 413).
Then, I added a number of yellow highlights to the flower. I wanted the center to be a bright yellow colour, but also some of the folds and sections in the petals too. I used a light yellow for the base from Spectrum Noir (LY2) and then added some stronger yellows from Nuvo (401 and 405).
Now there are a number of pinks I've used. Some petals sit behind the front ones and have darker shading so I used some darker, dusty pinks for those (Nuvo 451, Spectrum Noir's MG1, AP1). For the top pinks I went for lighter and brighter colours (Sizzix 28, Spectrum Noir FS8, PP2, MG2 and Nuvo 453, 454).
I build up my colour from light to dark, and each petal was coloured individually. This meant it took over two hours to do the colouring, but I really wanted to focus on where the colour on each petal would lay. 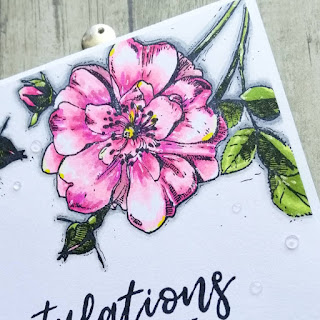 Once the colouring of the flowers was done, I also added a number of additional elements. I first started with some grey shades around the flower. This adds depth to your pictures and a bit of contrast between the white paper and the flower. I used darker greys around the base of the flowers, as if they were further from the light and created a larger shadow.
Then, I took my Copic Liners and added some marks around the flowers. I feel that a flower such as this one yields itself to a more rugged look.
Finally. I also used some small white Gel Pen lines on the flower and leaves to add a bit of contrast.
I feel these additions really enhanced the overall image and look of the card. It takes a while, but it's worth it! 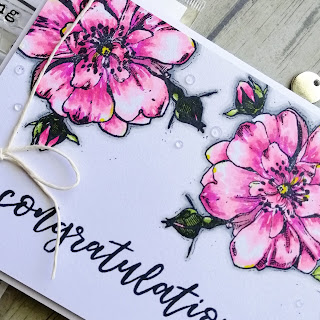 The final touches for this card include adding some thin twine to the left side, and a few clear Nuvo drops. Pop it onto a card base and this is a gorgeous card ready for your next wedding!

That's it! This card is pretty special to me and I hope you enjoy it too. If you like me to continue sharing the specific colours I use on cards, let me know!