I have some super exciting news to share with you all.

I've been invited to Guest Design for Technique Tuesday in October! It's a dream come true and you all know how much I use Technique Tuesday's products. I am very happy to share the cards I made using the new stamp from the Greenhouse Society line: the Holly. 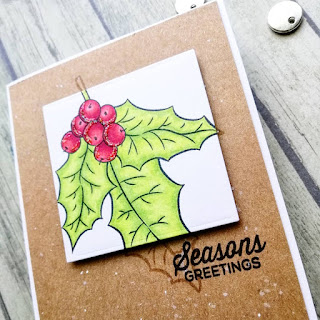 What is a Guest Designer? Well, a designer for a crafting company is someone who has been invited to use the products released by the company for a time - some companies have teams for three months or six months, it completely depends. Designers generally receive the products for free and have to make a number of products with the new line. They will then provide pictures and blogs of their creations to the craft company, which can be used to market and advertise the new releases.

A Guest designer does much the same for the company, but it's usually for a very short period of time. I've been very lucky to be asked to do this for Technique Tuesday, and I hope I inspire you with these cards today.


Let's dive right in and look at the first Christmas card I made using the Holly Stamp Set from Technique Tuesday, featuring kraft paper and Nuvo markers.
This card is a fairly basic design, easy to reproduce and looks gorgeous.
I stamped the Holly image onto the kraft paper with a watermark ink pad, and then also stamped the image on a die-cut square to layer directly over top. The idea is to have some of the stamp coloured, and the rest outside of that square to be visible but not the main focus.
I then took my Nuvo Markers and coloured the stamp with the traditional green and red colours. 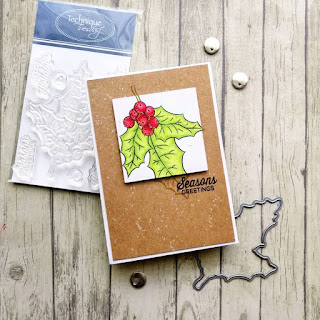 Before I put everything together, I grabbed some white ink and added splatters to my kraft paper. This is so fun to do, especially in this instance as the technique resembles snow! I also add some white dots with my white Gel pen for clarity.
I used foam adhesive to place the coloured Holly on top of the watermark stamp on my kraft paper, and used my Tim Holtz stamping platform to add the sentiment underneath the holly.
Finally, I took my Nuvo White Blizzard drops and put it on the berries. I used a toothpick to spread out the glitter so that it adds some shimmer and dimension to the card.
Finally, I put everything on a white cardstock base and that's my first card finished! 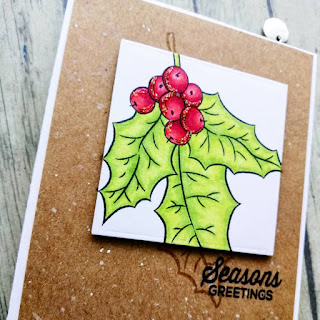 Okay time for a fun fact: I live in Australia. I've never seen real holly before, or mistletoe, or any other traditionally cold-climate Christmas plants. It's interesting to google and see what they actually look like, and try to replicate that when I can, even though I've never touched any of these plants.
For this next card, I really focused on replicating the colours of the holly leaf - I noticed that holly is darker but has a bright green stripe down the middle. 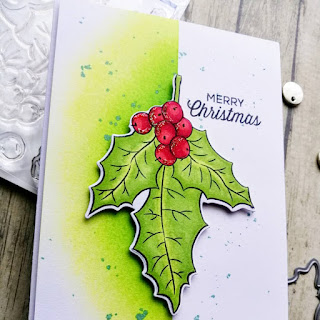 For this card, I used Thermoweb Purple tape and masked down the centre of my white cardstock. I then used my new The Stamp Market blending brushes to layer Distress ink - from dark green to light yellow - on the left side. I also added some dark speckles from the green to the whole page. 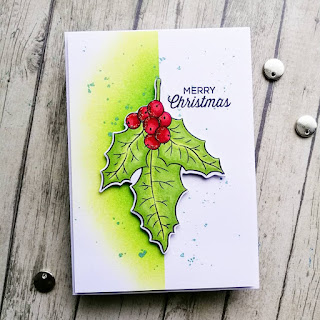 I stamped the Holly branch and then coloured it in with my Nuvo Markers, focusing on the leaves as mentioned above.
I then die-cut the stamp with the matching dies and layered it straight down the middle of the shaded divide on the card. I stamped the 'Merry Christmas' sentiment and added some Nuvo glitter drops on the holly berries as before. Nice and simple but I like it.


For this final card, I focused on the background with blended greens (using my Stamp Market brushes - I am in love with these things, they're so fun to use). 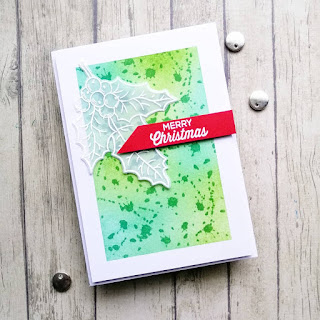 I took my Lawn Fawn vellum and embossed the holly stamp with Ranger embossing powder, and die-cut it out. It's always good to double-check your work when you die-cut an embossed-on-vellum image. Sometimes not all of the powder is still on the image, an edge may chip off. It's good to have an embossing pen so you can fix up those small mistakes if you need to. 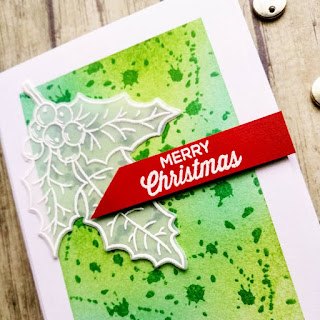 I really wanted some red on this card to fit in with the traditional Christmas Colour, so I grabbed red cardstock and cut it down to size, then embossed the sentiment.
Vellum shows any adhesive behind the backing so I had to be careful about how the sections were layered. I would love to use a sticker maker (like Xyron) but they are often too small, even for these images. Instead, I marked where the embossed Holly and the sentiment strip would overlap, added some thin adhesive on that section of the Vellum and put it down on the cardstock.
I then took my foam adhesive and layered the sentiment strip over the vellum so that it would stick down and hide the adhesive. This way the image is still free but not damaged by any extra adhesive.
Final steps include placing everything onto a card base and making sure they're all lined up - there's nothing worse than ruining a card with your last task! 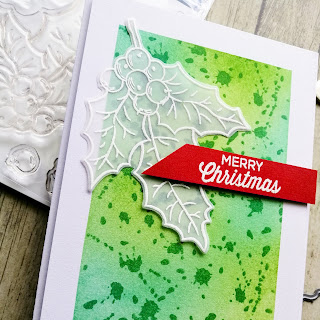 I have one final card to share today. When looking for Holly colours, I noticed that some leaves have yellow or even silver lining. I decided to go with that idea for the colour on the leaves this time. Nature is not often symmetrical, so it's fine if one side of the leaves have more yellow than another. 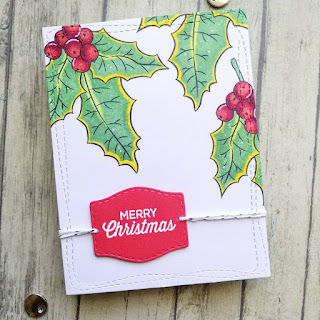 I used the Simon Says Stamp wonky stitched border die for this card, and stamped the Holly a few times along the top.
After colouring with my Nuvo markers, I took some white stamping ink and smeared it on top of some flimsy acetate. I then used my paintbrush and some water to add some specks of white to the leaves. It's not very easy to see these flecks though, at first the white ink just melted into the marker colour. I added some dots and flecks with a white gel pen to really get that white snow look at first glance, and you can still see that white ink a bit in the close-up pictures. I also added a few small white lines onto the berries. 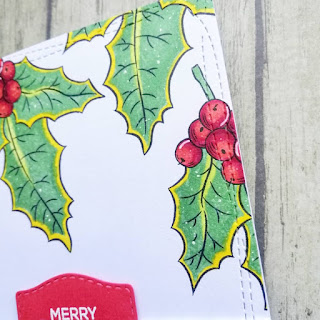 I used a Technique Tuesday Jam Jar Label die on red cardstock, white embossed a sentiment from the Holly set and then used some white and silver string to lay across the card. Everything is popped onto a card base and we've completed another Christmas card for the stockpile!

That's it for today, everyone!
I hope these cards inspired you to make some Christmas greetings in preparation for the Holiday Season. Whether you have snow or sunshine, it's always a pleasure to spread some joy.