What a time we're living in, huh? It's been a crazy 2020 and honestly, I'm not sure if anyone knows what's coming next! Bush fires ripped through much of Australia's backyard, and now the world is in turmoil with the Corvid-19 virus spreading rapidly. It's enough to wonder how the economy will cope, how people won't go crazy if they're in lockdown, and what the world is coming to!

However, I'm here to brighten up your day with some gorgeous peacocks from the new Technique Tuesday March release! It was a lot of fun to sit down and colour, focus on my desk and not what's going on outside. I hope you enjoy! 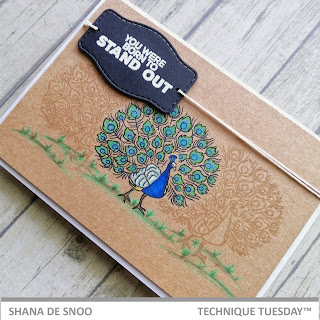 I was very excited when this Pretty Peacock set was delivered to my door last week! I was on Rottnest Island with my best friend for a night getaway and I happened to spot a peacock over there which was amazing! I came home refreshed and ready to get some serious colouring done. 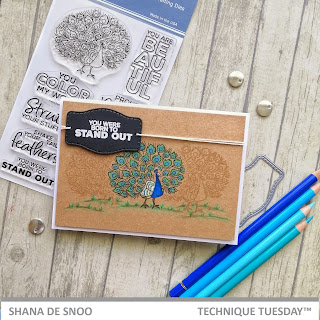 This idea was in my head as soon as I saw the sentiment on the pack.
I stamped the front peacock using Memento ink, and the background ones using watermark ink. I coloured the peacock using my Faber Castell Polychromos pencils, and the green grass too. Once all the colouring was done, I went over the peacock with a black pencil to emphasise the lines which really helped the colouring stand out. 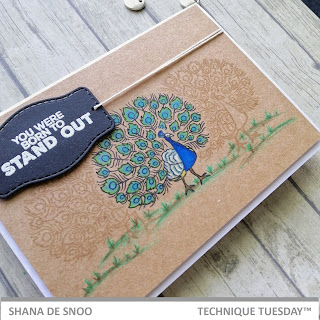 I then embossed the sentiment onto a die cut from the Stitched Essentials set, punched two small holes in the sides and added some white string. I placed everything onto a white card base and I was done! The colouring took quite a while but I had fun.

For this next card I focused on doing a window card using acetate. It's a lot of work but very satisfying once the project is done! 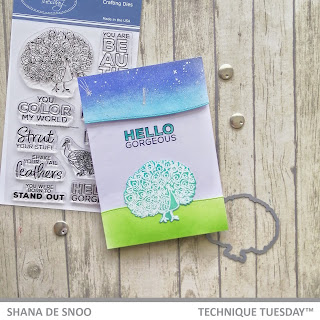 I did some blending work using my Stamp Market brushes and Distress inks. I first blended some turquoise colours, and embossed the peacock in white powder to make it stand out.
I then took my Slopey Joes border dies from Heffy Doodle and cut some borders out of white cardstock. I blended greens on one section, and a range of blues on the other. I added some silver splatter and stars on the blues to give it a night sky look. 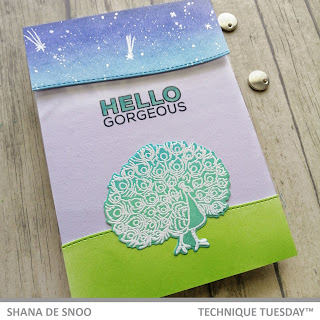 I took white cardstock and folded it up the top for an open A-shape card. I then trimmed off the front of the card (leaving a bit for the acetate to hold on to.
I took my clear acetate and trimmed it down to roughly the size of my card base. I glued it behind the front flap, and cut it down with my trimmer to be exactly the front size.
I then placed those two border sections on top of the acetate, the blues at the top and the greens down the bottom. 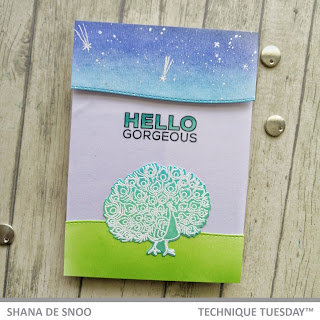 That's it for today everyone! I hope these cards brought a smile to your face and brightened your day. Stay safe everyone, and I'll be back again soon!